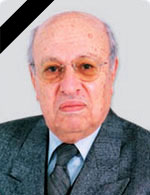 THE TUNISIAN ARBITRATION DEAN PASSED AWAY

We are deeply saddened to announce that Mr Habib Malouche passed away on 27 September 2019 in his 92second year of age.

Mr Malouche has drafted many arbitration rules such as those of the Tunisian French chamber of trade, the Tunisian Italian chamber of trade and industry and many proposal of laws and amendments to the said law in relation to arbitration. Mr Malouche is the author of more than 50 publications in the fields of international arbitration, the Tunisian law, in Arabic, French and English as well as many testimonies of Tunisian history at the time of its independence. He also contributed significantly to the development of the law in many areas through his participation in expert commissions, associations, conferences and scientific commissions.

Mr Habib Malouche take an active part in the implementation of the basis of the Tunisian state as well as the foundations of its administration and economy. Tunisia has lost a rigorous scientist who has been a mentor for many generations of Tunisian Academics.

We have lost an extraordinary legal mind and an exceptional man. An eminent professor of law, a passionate international arbitrator and a man of immense culture and open mind, he knew how to combine intellectual rigour, a big energy and sense of humor. He was and remains a source of proud for all of us.